The Herbarium (Herbarium Universitatis Mediolanensis-HbMI) is based at the Department of Biosciences and collects and preserves the non-living heritage of the Città Studi Botanical Garden (OBCS). The main core of the historical collections arises from the activity of the High School of Agricolture, founded in 1870 and included in 1935 within the University of Milan.

This rich heritage is composed of wall charts and xilotheques  as well as numerous exsiccated herbarium specimen collections. Vascular plant collections consist of many tens of thousands of samples that have been arranged following the original collection. Those belonging to important collectors form the historical herbaria: among the most important ones, Sordelli, Corti, Ardissone, Cobau, Fiori-Beguinot herbaria, dating back to 19th and early 20th century.

Together with the historical herbaria, modern specimens, placed in systematic order, form a heritage of 6000 specimens. Lower plants and fungi are included into the Italian Cryptogamic Herbarium, including bryophytes (15000 specimens), algae and fungi (more than 25000 samples). Data from each exsiccatum have been included in a database. Since 2017 OBCS carried on an important project of preserving this cultural heritage through digital technologies 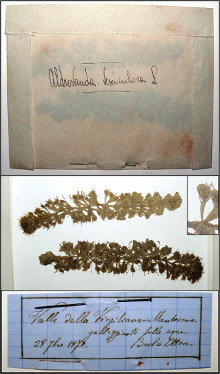 Herbarium specimen of Aldrovanda vesciculosa, aquatic carnivorous plant extinct in Italy according to IUCN, for which reintroduction projects are in progress. The specimen was collected in Mantova in 1870.